By Tadek Markiewicz, an alum of MA program in Peace and Conflict Management, 2014-2015 Cohort. 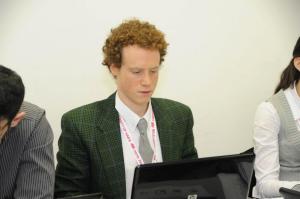 Currently Living:  In “Garden of England” Canterbury in the United Kingdom. It is a beautiful university town world-known for its Canterbury Cathedral.

How did you find the program at the University of Haifa?

First let me tell you that I visited the University of Haifa during summer vacations years before I decided to study here. I remember I truly liked the stunning location of the campus and the peaceful, yet vibrant downtown of Haifa. When I was looking for the MA program I knew two things: that I want to study in Israel and that I want to do something related to international affairs. I carefully read and compared all prospectus of the MA programs in Israel. The reason why I choose Haifa was pretty simple. Curriculum of the International Peace and Conflict Management program was most interesting and eventually convinced me to ‘come back’ to the city.

Were there any other reasons why you decided to come to Haifa?

I knew publications of some of the scholars affiliated with the University of Haifa. Thus I think that the good academic reputation played some role here. The location of the city was a plus. On one hand it is only a 50 minute train ride to Tel Aviv, on the other, it is close to the Northern Galilee. To me the most picturesque part of Israel.

What are you doing now after completing your studies?

After the program I worked as investigative journalist at OKO.Press. It is a renowned Warsaw-based news site specialising in fact checking and analytical journalism.

Currently I am a PhD Candidate and a Teaching Assistant in International Conflict Analysis, at the School of Politics and International Relations at University of Kent in England.

How has your degree from the University of Haifa helped you in your professional/academic career?

I met some amazing scholars in Haifa! I attended absolutely fascinating lectures of Professor Michael L. Gross on Ethics of War. I was constantly challenged by Dr. Keren Sharvit, current head of the International Peace and Conflict Management Program, during her Social Psychology on Intergroup Conflicts classes. Later, under diligent guidance of Professor Uri Bar-Joseph I wrote my MA thesis on the role of victimhood narratives in armed conflicts.

I met here faculty that not only gave me tools to develop my research skills and ‘sharpened’ my analytical blade, but most importantly supported me in my dream to go into academia.

Keren exposed me to the cutting edge research on psychological dimensions of conflicts. Because of her lectures and patience I received the necessary knowledge and guidance to develop my own research.

Uri helped me through time consuming and challenging process of writing my MA thesis at the research university. His and Keren’s careful review of my work helped me to develop an interesting scientific project. After I completed my studies. Keren, Michael and Uri supported me in very stressful process of applying for PhDs.

I could not wish for more supportive and stimulating study environment. Thank you University of Haifa!